The North End typically consists of 20th century row style houses. Residents find comfort in the fact the neighborhood rarely changes and the area is surrounded by history that dates back to the revolutionary war. The North End is a thriving area with authentic Italian Restaurants and plenty of bakeries for dessert. Residents can visit the famous Regina Pizza that has been open since 1926 and then go around the block to Mike’s Pastry for dessert. Hanover Street is lined with restaurants and businesses, which makes the area convenient. The North End is in walking distance to the T-Stops North Station and Haymarket making commuting around the city easier. There are also bus routes in the area that are available for residents located on Commercial and North Washington Streets. There are multiple pit stop markets for your quick needs with food and drinks. On the weekends, residents are a short walk to Haymarket, for an open-air fruit and veggie market.

The North End, or also known as, “Boston’s Little Italy” is the city’s oldest residential neighborhood dating back to the first settlers in the early 1600’s. The area was originally a narrow peninsula surrounded by water on three sides. Later, there was land added on to Mill Pond by using soil from the top of Copp’s Hill and Beacon Hill to add more land.

During the 18th Century, there was in increase in prominent people of British ancestry that began settling in the North End. These individuals worked in mercantile and shipping industries, and began to build beautiful mansions in the neighborhood. During this period, historical landmarks like St. Stephens Church and the Eliot School, which is the oldest elementary school in the United States. In the 1740’s Peter Faneuil donated money to have Faneuil Hall built, which is adjacent to the North End. The design of the building was to serve as a town hall and marketplace for the city of Boston. The Old North Church was constructed during this time period as well and is the oldest surviving church building in Boston.

In the 19th Century, the North End had a significant increase in commercial development on Commercial, Fulton and Lewis Street. Then during the 20th Century the famous “Great Molasses Flood” occurred by a 2.3 million gallon molasses storage tank exploding. This caused a 25-foot wave of molasses flooding down Commercial Street toward the waterfront taking everything in its path. In today’s money, the endeavor would have cost the city $100 million. 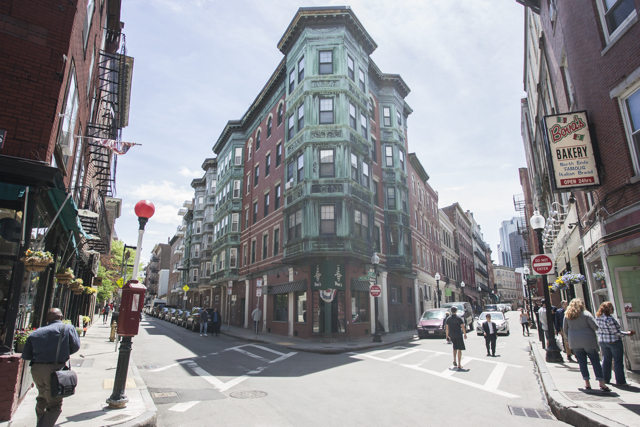 The Paul Revere House, 19 North Square: Paul Revere was a North End native born in 1734. Revere’s primary vocation was a goldsmith/silversmith. He was a master of silversmith for 40 years and was highly praised during his lifetime for his work. His political involvement arose with his connections with the members of local organizations and business patrons. The year before the Revolution, Revere gathered intelligence by watching the Movements of the British Soldiers. Revere was the courier for the Boston Committee of Correspondence and the Massachusetts Committee of Safety. Paul Revere is credited for spreading the word of the Boston Tea Party to New York and Philadelphia. He is most notably known for his midnight right to Lexington and Concord to warn John Hancock and Samuel Adams that the British were coming.

Old North Church: Founded in 1722 and located at 193 Salem Street, Christ Church, or also known as Old North Church, is Boston’s oldest surviving church building and most visited historical sight. Old North Church gained its fame on the night of April 18, 1775. Robert Newman and Captain John Pulling, Jr. had climbed the steeple on the order of Paul Revere to hang two lanterns in the steeple. The lanterns were displayed to warn Charlestown Patriots across the Charles River that the British were coming on boats across the Charles River to land near Phips farm. These lanterns were used incase the messengers were arrested or captured along the way to warn the Patriots.

The North End is known for their annual festivals, also known as feasts, which are held throughout the entire summer. They are to honor the patron saints of the different religions throughout Italy. The statues are paraded down the streets of the neighborhood, while bystanders attach dollar bills to the statues for donations. The feasts include marching bands, food, games, live music and other vendors.